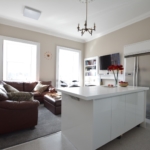 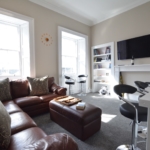 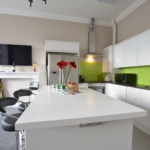 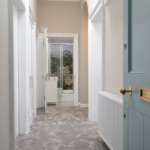 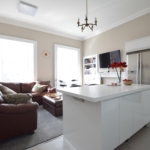 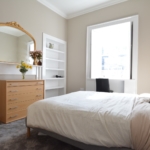 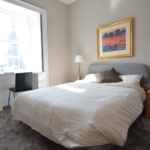 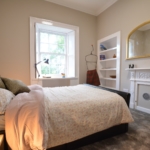 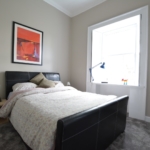 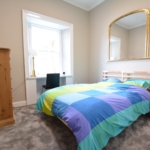 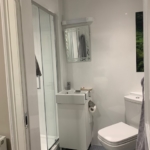 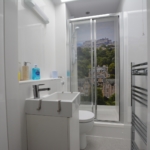 Sleeps 3 – 6 persons. This top floor 3 bedroom flat is in the perfect festival location on West Nicolson Street (just 2 minutes walk from George Square and Bristo Square). The apartment itself has just been completely refurbished with new kitchen, bathrooms carpets and appliances. It comprises a combined living room / kitchen area (with dishwasher) and bar stool dining around a feature kitchen island. There are 3  good size double bedrooms (1 kingsize and 2 doubles) and 2 compact newly fitted shower rooms (one which is en-suite). BT Wi-fi and freeview TV are also provided. Price is £4750 based on a 28 night stay during August. Any additional nights charged at £150 per night.?

The Southside of Edinburgh is just south of the Castle and close to Edinburgh's Old Town, a very popular term time location for students of Edinburgh University and during the summer for festival performers and visitors.

It is home to many great festival venues such as C Venues, Zoo Venues, Summerhall Place, Queens Hall, The Pleasance Courtyard Underbelly and Assembly at Bristo Square and George Street Gardens. It's truly a very colourful area during the Edinburgh Fringe and Summer Festivals. There's plentiful and varied neighbourhood pubs and restaurants and permanent arts venues such as The Festival Theatre and Queens Hall underpin the area as a cultural hub.

For all you keen swimmers and gym bunnies, leisure facilities include the 50 metre Royal Commonwealth Pool complex, including gym and fitness classes (just a short distance away) along with a number of public parks including Holyrood Park / Arthurs Seat (a welcome and pleasant green space distraction from the excitement and noise of the city during the Edinburgh Festival).

Festival accommodation is mainly traditional tenement flats interspersed with a number of modern apartment complexes. Local amenities include excellent and numerous local shops, supermarkets, banks, post office and a number of bars, restaurants along Clerk Street and the antique shops along Casusewayside. A very regular bus service operates into the City Centre and beyond although the best method of getting around Edinburgh is by foot (with the odd Taxi / Uber thrown in).

Select property with 'Add to Shortlist' button and send us your enquiry. You can always call us on 0131 478 1294 for more information.